You are here:
Regatta 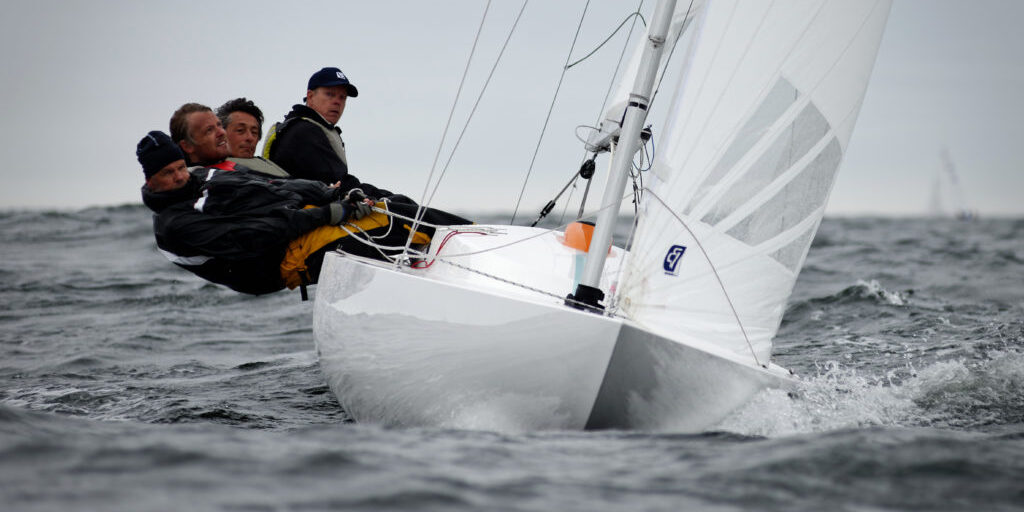 The 2019 Finnish Championship was sailed in Helsinki on June 28th-30th. The regatta was organised by HSK, the experienced hosts of the 2018 Gold Cup. A very positive outcome of last years Gold Cup is the a revival of the Dragon class in Finland. With this years 21 entries we saw the biggest fleet in years on Finnish waters. Another great thing were the foreign entries with boats from Russia, Estonia and Latvia, they truly made it an international event!

The first day of racing was sailed in 12-16 knots of shifty northerly winds. In the first race, GBR 408 sailed by Dmitry Bondarenko, Vadim Statsenko and Aleksander Shalagin held their lead from start to finish and got a comfortable win. In second finished FIN 92 sailed by Peter von Koskull, Ii-min Tcheng, Niko Ruokosuo and Andreas Johanson. In 3rd place was FIN 64 sailed by Tom Jungell, Markus Mannström and Jaakko Rantala. The second race was won by RUS 32, sailed by Boris Latkin, Oleg Chugunov and Aleksei Murashkin. RUS 32 was followed by GBR 408 in second place and FIN 92 in third. After racing the sailors enjoyed a barbecue, beers and sauna hosted by the Finnish Dragon Association.

The second day saw wind speeds pick up to 16-22 knots and shifting more towards west-northwest. The organising committee led by Ted Gröndahl did a great job setting up the courses. When the fleet got going, FIN 92 was in good form winning both races in the tricky and gusty conditions.

”We sailed really well today. I feel we made all the right choices going upwind and being fast downwind and getting shifts right always helps.” – Andreas Johanson.

GBR 408 and FIN 64 continued their good series finishing the day with a 2nd and 3rd respectively. At this point of the race the top 3 boats had developed a lead over the rest of the fleet and all three had a great chance to win the Championship on day 3. The second day of racing ended with sauna (we are in Finland after all!) and drinks hosted by HSK.

Day 3 saw the wind shift towards west with the speeds going down to 10-14 knots. The first race saw a duel at the start between FIN 92 and GBR 408. Both teams had a poor start and FIN 64 went on to a comfortable win. LAT 3 sailed by Anna Basalkina, Eriks Masteiko and Vlado Ukraintseva sailed a great race finishing second. FIN 92 got the upper hand of GBR 408 by advancing to third place after a poor start with GBR 408 finishing 7th.

The last race proved to be a nail biter as FIN 64 got a great start at the pin and crossed the fleet early with a big lead over FIN 92 and GBR 408. First around the windward mark was FIN 86 sailed by the FDA chairman Mikko Jaatinen with his sons Ossi and Akusti. Second was FIN 64 followed by GBR 408 and FIN 92. On the first run FIN 92 managed to time their gybe just right and passed GBR 408 and managed to get right behind FIN 64. On the last beat FIN 92 took the lead when they were able to pass FIN 86 and FIN 64. Starting the last run the top 4 boats were all very close with FIN 92 crossing the line 1st, FIN 86 2nd, GBR 408 3rd and FIN 64 4th. With these results FIN 92 ”Margaret” was able to clinch their second Finnish Championship in three years. The great team of GBR 408 won the silver medals with the team of FIN 64 finishing 3rd.

”I am very happy for this win! We worked hard and sailed very well, especially when the pressure was on. Being able to recover every time we were in a bad spot is really satisfying. The guys sailing GBR 408 and FIN 64 are great sailors and that makes this win even better. This was a great event with a skilled race management and outstanding facilities. Seeing the fleet grow in Finland and getting teams from Russia, Estonia and Latvia is a big thing for us, so thanks to our visiting friends as well! -Niko Ruokosuo

The Russian championship will be held at the Terijoki yacht club, Zelenogorsk
18/03/2020
Recent posts
Search
Go to Top